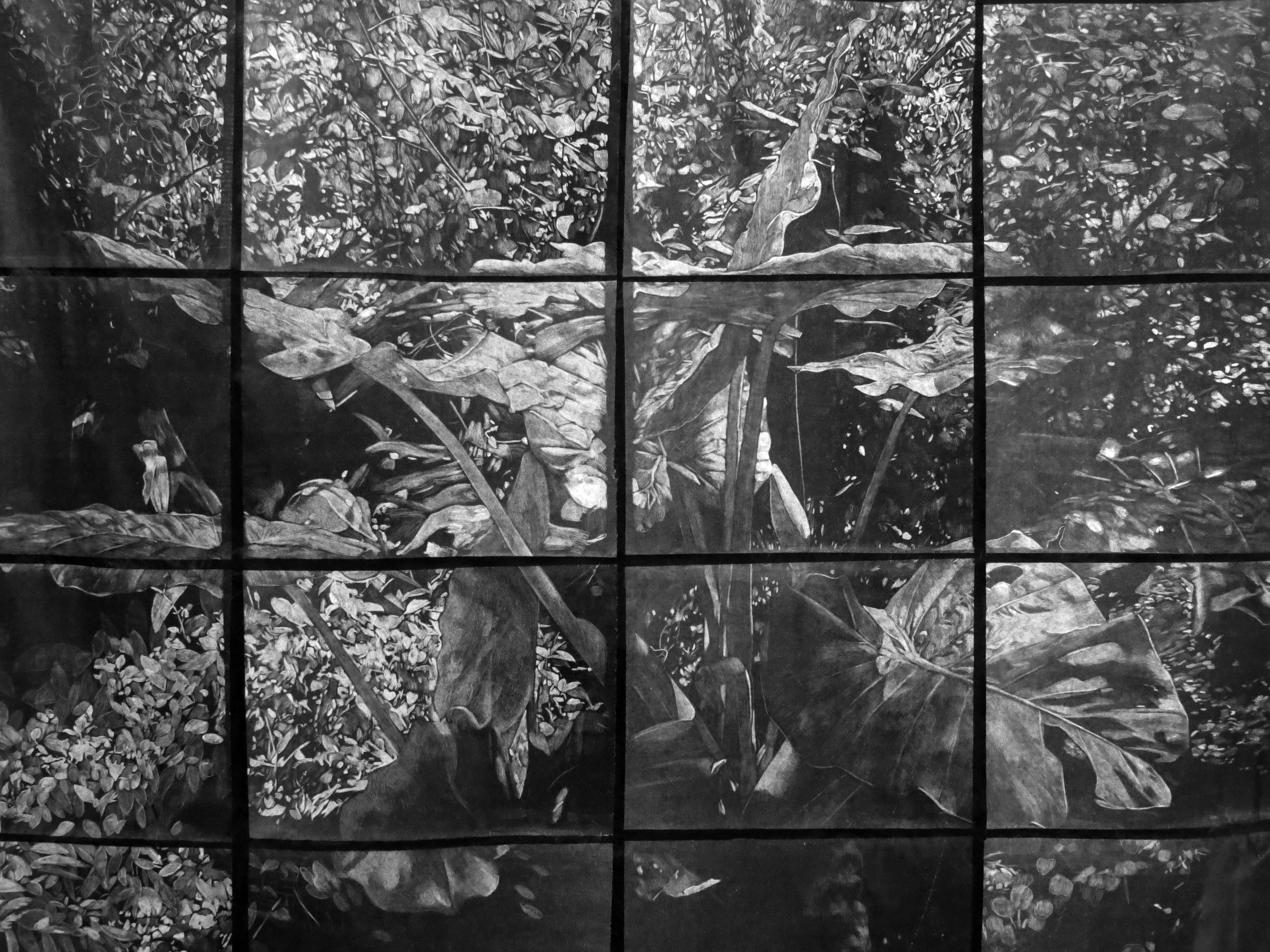 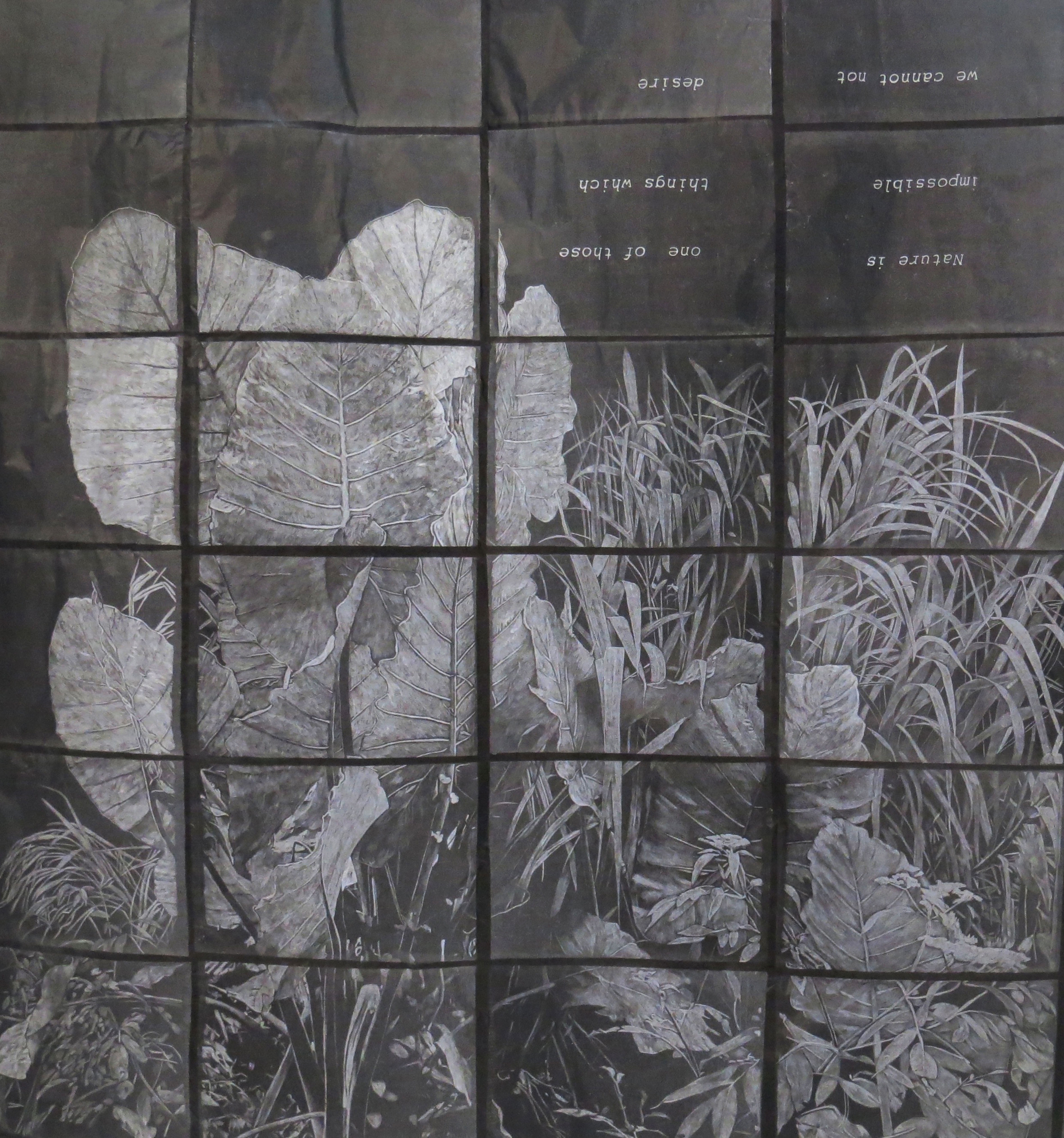 Marta Roberti, an Italian artist born in Brescia in 1977, moved to Verona to study philosophy and here she has found her hidden talent: drawing and painting. After graduating at Accademia di Brera in Milan she now lives in Rome, where she works as a philosophy teacher and continues her artistic journey investigating repetition, process, learning and neoteny through archives, videos, photos, and performance, teaching us how to reconnect with our primordial sensibility and what’s the value of art and life.

Height, length and depth of your last work.
It’s an installation made up of a series of huge drawings on graphite foils hanging in the room, creating something similar to a path in a forest, accompanied by some drawings of fluorescent pink plants hung on light box walls. Being composed of different parts linked together which relate to the space around them, the installation doesn’t have specific dimensions.

What’s the meaning behind this installation?
I have been living for three months in the Yangmingshan National Park, near Taipei. Everyday i walked though the forest, shooting compulsively. I kept asking myself why I was so obsessed with the wild nature, so I started reading Zizeck and Donna Haraweay, two philosophers who were concerning themselves with ecology and nature. I understood that “nature” is a cliché, a paradox, a name we use to indicate something we can’t live without but we can’t have at the same time.

We usually distinguish between nature and culture, as if the were two opposite ends. Instead, I believe nature as we mean it doesn’t exist at all: nature is an artifact because it’s generated by the interaction among different actors, not all of them are human, and it doesn’t exist before its construction. Actually we use the world “nature” to indicate whats different from culture and the human being, and we tend to deny the fact that its a fickle concept, a trite statement.

I wanted to share these and other observations of mine and to do that I took a device originally intended for another purpose: mirror writing, which appears in the exultet, medieval scrolls that I saw for the first time at Museo Diocesano in Bari. They are long, marvelous illustrated strolls where phrases have been wrote in reverse in respect to images. This is because the stroll was declaimed by the priest, who used to read what observants would understand far better looking at images, a sort of primordial graphic novel. Therefore I arranged those phases written in reverse to examine in depth the meaning behind the images. Thus, I avoided being too didactic since they blend perfectly with the drawings.

Could you please define yourself and your work with five key words?
ego
non-ego
natural
unnatural
impersonal

With your art you create a new kind of nature, a natura naturans, a “supernature”. What’s the role of the human being in this brand new universe and what’s the value of the primordial element indissolubly linked with earth in the digital age?
My work is set in the middle of the woods or in the forest, I’m referring also to my early animated drawings. Now I’m reflecting on what I used to understand unconsciously and I realize that choosing nature as the main theme of your work of art can be risky since it can be perceived as nostalgia for a bucolic and romantic world, for a world that is lost forever, which actually never existed.
To tell you the truth I tackle this concept because I have the feeling that this new age vision of the natural world is just a big misunderstanding: nature is linked to catastrophes and not all of them are caused by men. In the digital age, the age of “Amuchina” and men who wax, I’m interested in the natural world and the non-human world because I believe it’s necessary to consider nature and living matter in their own unpersonalized dimension. I think we should value the secret of the life that runs in our veins, the areas in which our ego is nothing but “a temporary spasm” of this enigma that is life.

To quote the title of you exhibition, “Il fondo sale alla superficie (senza cessare di essere fondo)”. What is that art can bring to light?
Reality is the result of a radical reduction, because we thought that anything that didn’t fit in the principle of causality – on which rational and scientific thinking is based – wasn’t true. If reality has been severed from the object of magic – that is seduction between beings – from the influence between inner and outer, from the synchronicity of events, then the duty of radical thinking and art is probably to reveal an enigmatic and magical vision of the world, a deeply subjective vision which counters the weight of the imposition of rational thinking.
The more such a vision manages to release itself from the invisible strings of cliché and conditioning – which contaminate every possible medium we chose to express ourselves – the more it is subjective and free. For this reason probably the artist is privileged thanks to the invention of a medium, which is what I tried to do using these graphite foils.

If you had to “wear” one of your works, which would it be?
The one that is shaping in my mind right now observing the last work I created.

ywyw means “you are what you wear”. In your opinion we are…
What we tell.